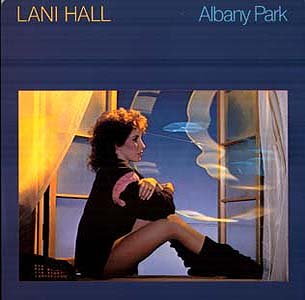 Produced and arranged by George Tobin
in association with Mike Piccirillo for
George Tobin Productions, Inc

Counting A BRAZILIERA, ALBANY PARK is Lani’s seventh solo album, and except for a couple of other tracks here and there would be her last English language album to date. And it’s a pretty good one, too. Singles from the album included the ballad “I’ll Fall In Love Again” and the Motown classic “Jimmy Mack”, but the really memorable effort here is Michael Nesmith’s “Rio.” Indeed, of all the tracks on the album, only “Rio” would show up on a future compilation album. Co-producer Mike Piccirillo’s “Take The Money” and “Under The Gun” on side one have a jazzy, contemporary feel to them, while “Who’s That Guy?” is bouncy and hook-laden. Lani gives an amusing staccato vocal treatment on Russ Ballard’s “Are You Cuckoo?,” while “Here Comes Another Heartache” sounds like it would be at home on a country music album.

A single from the album, “Jimmy Mack”, contained a b-side from the ALBANY PARK album sessions called “Love Makes The World.” It was composed by Mike Piccirillo and Gary Goetzman.