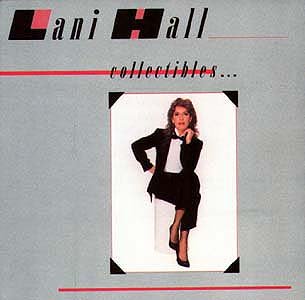 This 1984 compilation album, COLLECTIBLES, is not simply a collection of previously released tunes. While most of the selections had been released before, some are new, and many are re-mixes of the originals. The new material includes Michael Sembello’s “Midnight Lovers” and the James Bond soundtrack song “Never Say Never Again,” which while not really new, is appearing for the first time on a Lani Hall album. The track was produced by Herb Alpert and Lani’s former boss Sergio Mendes for use in the opening of the film, and features an Alpert trumpet solo as well.

Those two, as well as “How Can I Tell You” and “We Could Be Flying” are the only songs not “modified by Herb Alpert” as it’s phrased on the album jacket. The CD insert uses the word “adapted” instead of “modified.” All of the rest of the tracks are remixes; indeed “Come What May” has totally new vocal tracks by Lani and Herb. “We Could Be Flying” here is the original WINGS mix with full orchestra, while “Rio” seems to have lost some instrumentation, notably the brass. Many of the tracks lightly segue into one another, a dubious practice on many “greatest hits” albums. This is one of the three Lani Hall compilation albums that A&M did release on Compact Disc, and as such it is a welcome addition to one’s collection.