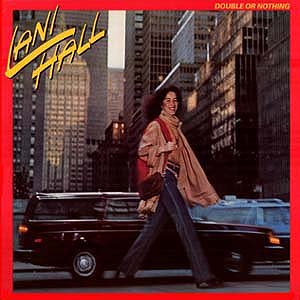 Tracks 1,2,6 and 10 produced by David Kershenbaum and Lani Hall

With three years passing between Lani’s last album and this one, the landscape of pop music had changed a great deal. The softer sounds of folk-rock and country-rock had all but disappeared in favor of the driving beat of disco, which was everywhere. And seemingly, everyone back then attempted a disco record. While most of this album is NOT disco, surely one song definitely is: the title track, “Double Or Nothing,” composed by Allee Willis. As was common practice at the time, a 12” disco single version of “Double Or Nothing” was released (A&M SP12019) to accompany this album and to promote the song as a single.

Just the mention of the word “disco” is enough to scare many away, and its presence does date the album. Other up-tempo tracks that skirt around disco without perhaps actually being labeled as such include “Nobody Gets This Close To Me,” “Shot In The Dark,” “Sailing Without A Sail,” “Sunshine After The Rain,” and “Magic Garden.”

With Lani sounding at times here like she doesn’t quite belong in some of these driving-beat songs, she is surely at her best on “To Know,” handling both lead and backing vocals with all of her considerable skills. The song’s composer, Buzz Feiten also joins in on lead guitar and backing vocal harmonies. Lani shares song-writing credits with piano player Neil Larsen on the beautiful “So Long,” a track that features just the two of them. The album’s closer, “Magic Garden,” another Buzz Feiten tune, has quite a catchy “hook.”